Toward the end of our van build I had a friend who was following our build photos, ask me if everything really did just work the first time for us as we built the van. I laughed out loud, and then realized he was serious. The answer is a firm and complete no. There is exactly one thing that worked first try in the van: Our bug net. We wanted a bug net for the sliding door so we could leave it open. All of the purpose built ones cost about $300, which was far out of our budget for this. So Stacy found a cheap $30 one meant for a normal double door in a house. We bought it, it arrived on time, and we installed it in under 5 minutes. And it has fit and worked perfectly ever since. That was the one and only thing that â€œjust workedâ€ in the entire 7 month build.

Our build was more complicated than most I think. Some of that is our fault. We put a lot of requirements on the design that most people skip. Water for instance, can be as simple as a foot pump and a 5 gallon water jug right under the sink. Ours is an electrically pumped water system running throughout the van, with a fill system, electrical for the pump, an accumulator to make the flow smoother, special piping to make the pump quieter, an inline propane water heater for showers, a drain that can either go to a gray water tank, or through the floor directly to the ground, the list goes on. And we did this level of complexity with every system. 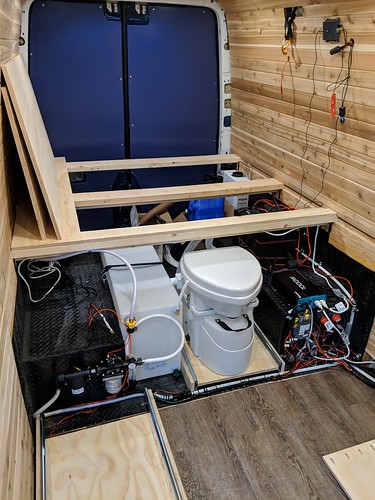 However a lot of the complications came from other sources. For one, we could not work on the Van by our house. Our HOA had strict rules aboutâ€¦ well everything. So we found a spot down by some abandoned train tracks where we could park and do what ever we needed. This meant that when we had to go back to the garage to get a tool, or use the table saw, or even just get lunch, there was a time tax. Some times in the midst of getting one small thing done you would, drive down to the van, realize you forgot something, drive back, get it, drive down to van, test the thing you made, get a new measurement, drive back, change it, drive down to van again, test it, repeat, repeat, repeat. Something that might have taken 5 minutes if the van was parked right outside the garage could end up taking 30 or 45 minutes. And that's for Every. Single. Task.

Then thereâ€™s Home Depotâ€¦ For the first couple months, we were also building out our tools and wood shop as we built the van. So weâ€™d realize we didnâ€™t have some tool, or some consumable item that we needed, and weâ€™d get in the car, drive to home depot, get absolutely lost in its massive aisles searching for something. These early trips were easily an hour or more door to door, in the middle of whatever task you were trying to complete. And very early only, we some times went three or four times in a day. 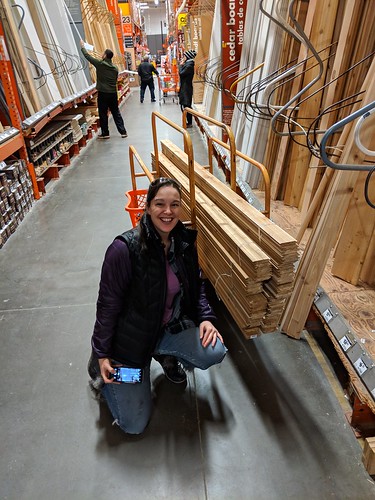 Thereâ€™s also the weather. It was the dead of winter, so the days were short, cold, and because itâ€™s Seattle, WET. Iâ€™d come home from work, and try to get a few hours of work in, but man oh man is it hard, after working a full day, to come home and spend time in a cold dark van down by some train tracks. 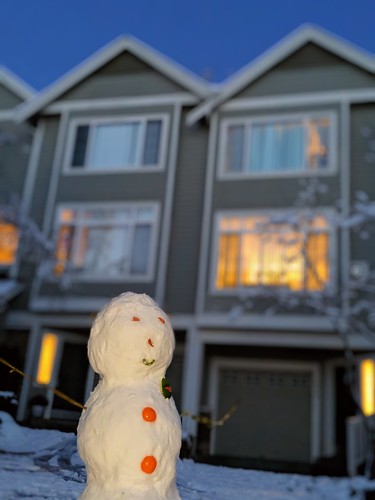 When I wasnâ€™t working in the van or garage, I was spending copious amounts of time watching videos and reading articles on how to do whatever the next task was. It truly was all consuming. We learned how to be carpenters, electricians, auto-body mechanics, propane experts, plumbers, and other things I donâ€™t even know the names for.

We never succeeded the first time in a task. When we installed our first water heater, it just didnâ€™t work. Weâ€™ll never know why, because as I was trying to loosen its water connection to debug the problem, I broke the metal fitting in two, with my bare hands. Then we ordered a new one, and it came with a broken battery compartment. Finally we drove an hour and bought a third water heater in person, and after some difficult fitting to the water and propane system, had it working. And this was the norm. Parts ordered online came late, or in quite a few cases, not at all. When they did come, many had problems and had to be sent back.

In the end we did of course get the van built, and with all of the features and requirements that we set out in the original plan. But it was just through sheer force of will, and a willingness to suffer through it for months on end as it dragged on. What we have now is honestly pretty great, but it did come at quite a cost, in stress and happiness. 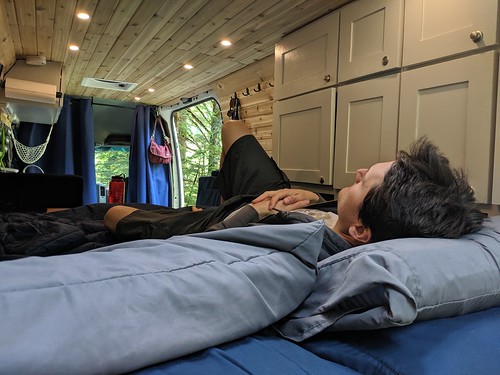