So you want to buy a van

When you decide you want to buy a van, there are a lot of options: Dodge Sprinter, Mercedes Sprinter, Ford Transit, Westies, Vanagons, tall ones, short ones, gas, diesel, just a bewildering array of options.

We had to step back and decide what we wanted in a van before we could make any decisions. First, I wanted to be able to stand up, if not all the way then come as close as possible. Since I'm 6' 5", that's a challenge. We also wanted to be able to lay flat in bed, which again, is a challenge for me in a van. We obviously needed to be able to carry all of the gear for two people: rock climbing (trad and sport), aid climbing, mountaineering and glacier travel, camping, backpacking, and skiing. That's a lot of gear. We had to be able to cook our own food to save money, and enough varieties of it that we aren't going to get sick of it and just say screw it and go out to eat all the time.

We also wanted to both be able to work on our laptops at the same time comfortably, and of course we're both PC gamers, so we had to be able to game in the van :P 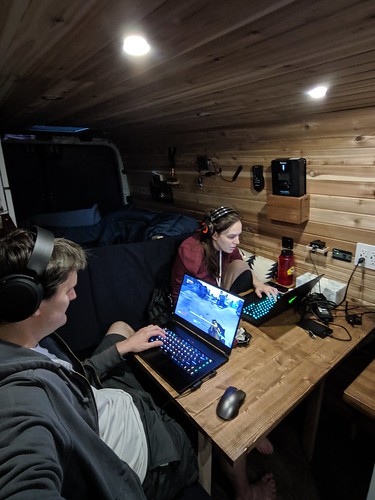 So we started looking for used vans in our area. We had read articles other van dwelling climbers had written about their build, and we had seen prices like $5,000 bandied about. It didn't take long to dispel this hope. There was nothing even close to that in the Seattle area. If we searched the rest of the country we could find stuff in the $10,000 range, but that meant an air plane flight to go see it and possibly not even buy it.

We spent a month or two looking in vain for a van that was in our price range and met some minimum standard, and came up dry. Finally we started lowering our standards and raising our price point, and found a few to go see.

After one particular visit we walked away asking our selves if all Sprinter vans were supposed to smell like that at our price point? If so, so be it, we we're doing this thing! But maybe we should keep looking in case not.

Finally we came across a van that was in our new range, $15,000 to $20,000. It had a reasonable number of miles on it for a diesel, and it had the tallest roof we had seen on a van. It was a bit beat up on the outside with mismatched doors and lots of dents, but we were getting desperate.

As soon as I stepped in I realized I could actually stand up, albeit with my head pressed against the ceiling. I gave Stacy the "oh my god this is it lets buy it eyes" while trying to remain cool in front of the seller.

We drove it around and I pretended like I hadn't already made up my mind. We left and told him we'd think about it, but pretty much immediately decided during the car ride home that we wanted it. We negotiated him down to $13,000, and he told us he wanted it in cash.

So a few days later my friend Alex drove me down after work with $13,000 in cash to give to the guy.

The cash payment, and some of the other communication had started to make me a little suspicious. Our seller was a young guy with a thick eastern European accent. He seemed nice enough but justâ€¦ cagey.

So I handed him the envelope full of cash. As he counted it out, I walked around the van, so many things swirling in my head, and then he walked up to me with a stern look on his face. "This is only $9,000"

My gut sank. I had not opened this envelope since they counted it out for me at the bank. That was simply not possible. And yet I had just give it to this guy I don't know, with no way of proving it. He could simply pocket the money and refuse the sale.

I said it wasn't possible and began counting the envelope bill by bill very methodically. My heart pounding, how stupid was I? The warning signs were all over this sale! Minutes passed, and finally, I got to and exceeded his number with many bills remaining. It came out exactly to the sum I knew to be in there. I showed him the piles of 5 bills and piece, proving it was all there.

Satisfied he had just miscounted we signed over the title and he gave me the key. Excitement returning I got in the driver side and looked around for a moment at this insane purchase I had just made, starting to grin. Then I turned the key in the ignition andâ€¦ click. click. click. click.

I tried again and only got one click. A third time and nothingâ€¦

He was still standing outside and promising this had never happened before and that the battery was actually quite new. We jumped the van with his fathers car, and then my self, Alex, the seller, and the sellers father raced to the local DMV to transfer the title.

And that was it. I drove it home in an absolute surreal haze. There was no turning back now.

P.S. The battery was most certainly not "quite new" and we had to replace it in the next few weeks. BUT WE HAD A VAN!!! 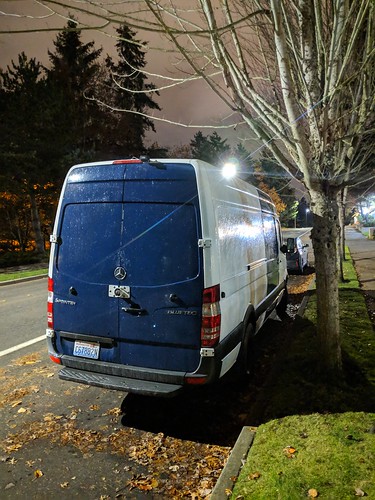